The Evolution of Radio

Radio Has Come A Long Way

In the generations since its discovery in the 1800s, radio technology has powered some of the most pivotal moments in history. Radio transformed the way we consumed news with the first news broadcasts in 1920. It was instrumental in WWII, when the iconic “walkie talkie” helped Allied troops communicate on the front lines. It was the reason we could hear, "“"That’s one small step for man, one giant leap for mankind," live as we saw Neil Armstrong touch down on the moon from over 200,000 miles away.

Today, Land Mobile Radio (LMR) has matured and become an indispensable tool for businesses of all types, from hotels, to theme parks, factories, and warehouses. As other communications technologies were introduced, from early cellular communications in the 1980s, to Wi-Fi and LTE in the 1990s and 2000s, radio has continued to be the communication tool of choice for the most important business- and mission-critical communications.

That’s because radio offers the fastest and most reliable means to communicate. With modern Push-to-Talk (PTT) technology, employees can talk instantly, without the dialing, routing, ringing, and answering steps of a regular phone call - all without the typing or dictating and sending of text messages. With no distractions to get in the way, PTT is what professionals use to get the job done right, when getting it done right the first time is critical.

The trouble is that while your LMR network is helping your teams stay safe, smart and connected, adding broadband data for business applications can be tricky. Consumer solutions just won’t cut it at a commercial site. Wi-Fi coverage and capacity can be limited. Access points can be temperamental. Wi-Fi just wasn’t designed for complex commercial operations like yours. 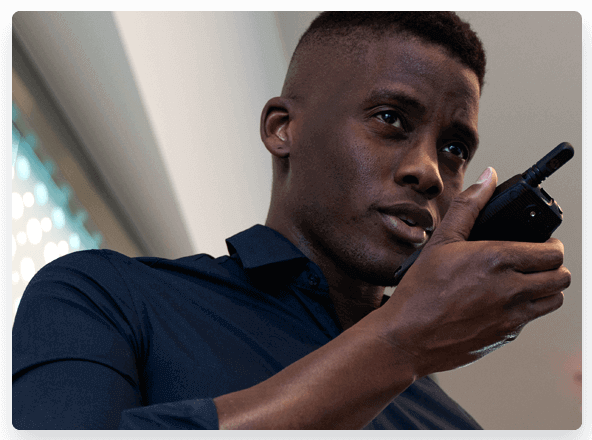 Now There’s A Better Way
MOTOTRBO Nitro is the new platform that combines business-critical voice with lightning-fast private broadband data. Nitro delivers clear, crisp voice quality and comprehensive on-site coverage, blanketing every corner of your operation. It supports all your devices—from radios and smartphones to specialized handsets—and extends your existing voice network to support a universe of data applications, including security, productivity, work-order ticketing and customer service apps. Adding Nitro to your current setup couldn’t be easier. We design, install, manage and maintain the entire system. You pay a monthly subscription. No up-front network costs or unexpected surprises.

At The Forefront Of Radio Innovation

If only Heinrich Hertz could see it now. The inventor, who in 1886 was the first person to broadcast and receive radio waves, famously quipped, “I do not think that the wireless waves I have discovered will have any practical application.” Of course, his discovery helped change the very nature of communications. Today, radio is still evolving, adding powerful features and applications that Hertz could only have dreamed of.

The Bayonne, New Jersey, police department is widely credited as the first to operate a Land Mobile Radio (LMR) system in 1933. LMR networks revolutionized radio communications, allowing instant communications at the push of a button. In 1943, Motorola, then called Galvin Manufacturing Corporation, introduced the first FM portable two-way radio, the SCR300 backpack, for the U.S. Army. This “walkie talkie” as it was referred to, helped the Allies communicate more effectively in World War II, and the technology evolved in the decades to come.

From the 1940’s to the 1970’s, devices were added to mobile vehicles, transistors were incorporated that allowed them to greatly shrink in size and data capabilities were added.

Mobile communications took another leap in 1983 when the first commercial handheld cellular phone, the Motorola DynaTAC, was approved by the FCC and went on sale shortly thereafter. While businesses began to adopt cellular phones, their limitations as an enterprise communications tool meant that they often took a backseat to other technologies, such as LMR.

In 1999, mobile data took another step forward as Wi-Fi was introduced for home use and became more ubiquitous in the enterprise space.

As devices came to market with embedded Wi-Fi chips, more businesses began offering guests Wi-Fi access to make use of them, while also using Wi-Fi for wireless enterprise use. This advance did have its drawbacks, however, including finicky access points, tedious sign-on processes, and spotty coverage over distances. As the demand for mobile data grew, Motorola introduced MOTOTRBO professional digital radios in 2006, a breakthrough solution that revolutionized business-critical communications.

The first commercial LTE deployment went live in 2009, and mobile enterprise apps became more powerful, taking advantage of the new speeds the network offered. Now workers could accomplish tasks on their mobile devices that previously required a computer or their physical presence at work. However, network congestion, weak signals in certain locations, and security remain issues for enterprises using public LTE for business.

Today, MOTOTRBO Nitro offers the first fully managed platform that combines business-critical voice with private broadband data. The platform supports all devices, from radios, to smartphones, and specialized handsets, while enabling a universe of blazing fast applications. All delivered as a secure, enterprise-grade service without the limitations of Wi-Fi and public broadband.

Wi-Fi is introduced for home use.

BUILT FOR DEMANDING WORKPLACE ENVIRONMENTS
Nitro is purpose-built for your business. With its high-fidelity audio, enterprise-grade private broadband, 24/7/365 support, predictive network monitoring and simple-to-deploy infrastructure, Nitro is a powerful tool to help your business thrive. See how boosting your network with Nitro can elevate your workplace operations.

HOSPITALITY
For large hotels and theme park attractions, Wi-Fi and cellular data can often become saturated due to guests leveraging the enterprise network. That means the safety, security, and overall productivity of your workplace can be put at risk simply because the communication efficiency of your workers has been compromised.

MANUFACTURING
At a manufacturing facility, Wi-Fi and cellular data can be inadequate. With so much metal and heavy machinery in the workplace environment, even the most traditional network coverage can be problematic - putting your team’s safety and productivity at risk.

TRANSPORTATION
In the transportation and logistics industry, on-time arrival and departure is imperative to business success. But environments can be dangerous - surrounded by fuel trucks and heavy machinery. And traveling passengers can congest Wi-Fi and cellular coverage. Avoiding delays can be a challenge.

UNIVERSITIES
On college campuses, everyone from teachers and campus security to administration workers and more - is using a multitude of different communications devices. In addition, with so many students on campus Wi-Fi and other cellular networks can easily become congested in times of emergency, putting the safety and security of students and educators at risk.

Get Secure, Enterprise-Grade Broadband
Flowing Across Your Business

MOTOTRBO® Nitro™ enables a seamless, unified operation by combining business-critical voice and private broadband data. Investment in MOTOTRBO Nitro is an investment in a long-term partner, not just a platform.